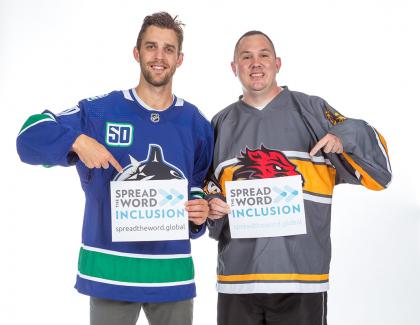 Special Olympics champions throughout the province and around the world support the Spread the Word>>Inclusion campaign to promote inclusion and respect for people with intellectual disabilities.

Individuals with intellectual disabilities and their families and many friends – including thousands of celebrity supporters and students – use this inspiring campaign and the annual international awareness day to rally people to pledge respect at spreadtheword.global.

New 2021: Special Olympics BC – Chilliwack volunteer Megan Owens, co-creator of the Inclusion Revolution Sports project, teamed up with artist Neve Quadling to create inclusion colouring pages and worksheets! Any class or individual can use these fun tools to inspire thoughts and acts of inclusion! Check them out:

Click here to be inspired by Owens' thoughts on inclusion

There are grassroots Spread the Word>>Inclusion events happening year-round in schools and communities throughout the province. And Special Olympics BC and our supporters share messages of respect and understanding through social media both on and around the Spread the Word>>Inclusion awareness day and all year round, reaching thousands of followers. Many celebrities, SOBC sponsors, sport organizations, and individuals help spread the word through posts and shares.

Click here to read about the ongoing support in B.C.

Special Olympics BC – Langley athlete Christian Burton: “The words we use can be very powerful and hurtful and cause a person to feel very badly about themselves. The R-word is one of the words that is very hurtful toward others. Even if it is not intended to hurt and is only used as slang or to make fun of a friend, it still hurts anyone who has an intellectual difference who may be listening. Using the word is never acceptable and we need to educate people to stop. Just Stop! We always want to be kind with our words as well as our actions.”

In Abbotsford, SOBC coach and youth champion Roshan Gosal annually worked with volunteers in all of the 11 high schools and local athletes to run the campaign in every school, and gained the support of their local Mayor as well as the University of the Fraser Valley. Read about their success in recent years where they attracted more than 6,000 pledges of respect to date.

Champions in SOBC's Youth Engagement Project have also used the campaign to open hearts and minds. Please click here to be inspired by their efforts!

Across Canada, supporters also pledge respect by joining our friends at motionball in saying there’s #NoGoodWay to use the R-word.

Sincere thanks to everyone who helps raise awareness and promote respect with these important campaigns!

More than ever, the world is in need of action for inclusion. In schools, workplaces, and communities, old and new divisions are leading to exclusion, social isolation, and social abuse, robbing all of us of the opportunity to learn and grow together. People with intellectual and developmental disabilities know this better than almost anyone, as many of the nearly 200 million people with IDDs globally continue to be marginalized and excluded in schools, workplaces, and communities around the world.

But it doesn’t need to be this way. An inclusive world can be created through individual acts of inclusion: finding and welcoming those who have been left out, being a teammate, becoming a friend. We believe that inclusion is a skill that we can all practice – and when we do, we become better at including all people. That’s why we are asking everyone to pledge to include, to commit to an act of inclusion in their school, workplace, or community. These actions can be as simple as sitting with someone alone at lunch, inviting someone who has been excluded to join a pick-up sports game, or welcoming someone

The Spread the Word to End the Word campaign worked to spread respect and inclusion for 11 years by addressing the excluding and demeaning impact of the words “retard(ed).” Since 2009, over 1 million people have pledged to end their use of the R-word. In 2017, 70 per cent of teens said they vocalized the wrong and demeaning use of the R-word when it used in conversation. Contrast that with 2009, when only 48 per cent of teens spoke up against it. The campaign’s new form – Spread the Word>>Inclusion – builds on the success of the past 10 years by continuing to challenge everyone to commit to respect and include.

In 2017, Special Olympics International released studies showing that a lot of progress has been made over the last nine years in promoting inclusion for all and changing attitudes and perceptions about people with intellectual disabilities. Teens, specifically, are standing up for inclusion and respect for all at school and in their communities. However, it appears that adults are aware of the R-word but are not as active in promoting inclusive behaviours.

Although the use of the R-word still exists and more acts of inclusion need to be encouraged, teens are having more connections with people with intellectual disabilities in school and in their neighborhoods, breaking down stereotypes and perceptions that exist for people with disabilities.

Several American studies from The Harris Poll conducted between 2008 and 2017 help provide a better picture of the use of the R-word by adults and teens, inclusive behaviours and overall acceptance for people with intellectual disabilities.

Some of the key findings were:

“Teens embracing inclusion are spreading a new conversation of acceptance, friendship, and empowerment,” said Soeren Palumbo, co-founder of the Spread the Word>>Inclusion campaign. “These agents of inclusion are re-writing the youth experience to no longer exclude people with intellectual disabilities but to include them as peers, teammates, and friends. The movement happening in our school hallways is gaining traction and pace to create a more inclusive society - and we will all be better for it.”

To date, the Spread the Word>>Inclusion campaign has generated more than 1 million pledges to end the use of the R-word, and millions more have signed banners and petitions throughout the world.