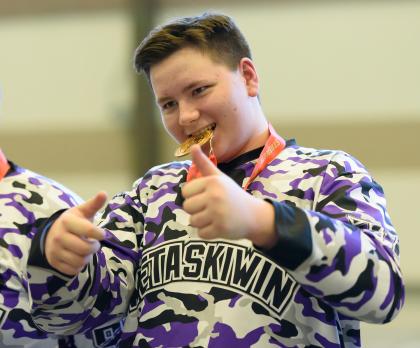 These games serve as qualifiers for national games and opportunities to be part of Team Alberta.

Strathcona County will be the proud host of the Provincial Summer Games. More details to come.

Calgary hosted the Provincial Winter Games from February 8 to 10, 2019.

See the SPORT, STRENGTH, and SPIRIT of the 2019 Special Olympics Alberta Winter Games.

Medicine Hat hosted the Provincial Winter Games from July 7 to 9, 2017.

The provincial games are an exciting opportunity for all athletes.  In order to be eligible to compete at Provincial Games, athletes must be a registered member with their local club and be in good standing with Special Olympics Alberta.

Athletes will register for provincial games through their local Special Olympics program. Although some athletes compete and train in many sports, they will only be permitted to register in one sport for Provincial Games. It will be up to the athlete and their affiliate to determine which sport they will wish to compete in.

For an athlete to be eligible for provincial games they must meet the following criteria:

Have appropriate maturation based upon the following:

Athletes can only be selected for one sport with Team Alberta because all sports will be part of a single National Summer Games.  It is a specific issue in instances where athletes would compete in a team sport and another sport.  If they choose their second sport over their team for Team Alberta selection then the entire team is in jeopardy.  We have a max number of replacements that we can make to a team when going to National Games so if multiple members chose their second sport that entire team would be disqualified from Provincial Team selection.